How do we make judgments? 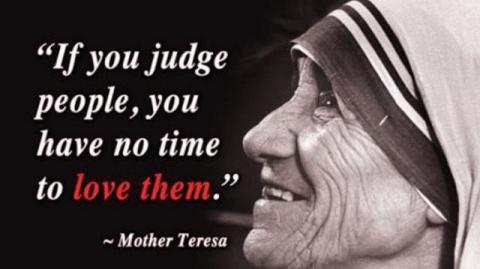 Let me start by asking you this question – How many people have you judged this week? Two? Three? Five to ten? Too many to count? – None? (You are a saint!) Judging others is something that happens everyday. I try not to judge but sometimes I just can’t help it.

Most times, you are judging people you see out in public. At a restaurant, grocery store, shopping mall, drivers on the road, etc. People you know anything about. You have no insight into why they dress, act, or talk the way they do. All you know is that you see something about them that you consider being ‘wrong’, ‘different’ or ‘inappropriate’ – and in walks in judgement.

Matthew 7:1-5 is perhaps one of the most important exhortations, found anywhere in the Bible, given to a Christian. This does not do away with judgment nor condemn it entirely. It merely says that if we judge honestly and according to God’s word, we are safe, but when we go beyond this realm we must answer for our actions. Not to people, but to a Holy God that always judges according to truth.

Jesus is saying we tend to exaggerate the faults of others while at the same time minimizing our own. The word “speck” is interesting. It can mean a chip or something that is small and insignificant. Jesus grew up as a carpenter’s son, and so this “speck” probably means a piece of sawdust, which can be extremely irritating when it gets into the eye. In other words, what Jesus is telling us is that it is easier to judge others than to improve ourselves.

When Jesus said, “Judge not,” it’s important to understand what He meant. This is not a prohibition against all judging, nor is it against rightfully discerning between right and wrong or making critical assessment. Instead it’s a prohibition against being God’s censors. A censor was a magistrate who had the job of supervising the morals of the community. In that position they were to find other people’s faults and be harsh in their criticism of them. If someone fell short of their expectations, then they would be censored or condemned.

Jesus teaches us in his word that we should not condemn other people. In other words, before questioning a brother or sister, we should look at ourselves, because we are all exposed to sin, whoever does not admit this reality lies and makes God a liar.

Now, exhortation and judgment are two totally different things. Unfortunately, in some churches that represent the body of Christ, there has been a misinterpretation of the principles of exhortation that seek the restoration of fallen brothers and sisters, and not in condemnation.