Jesus is outside waiting for you 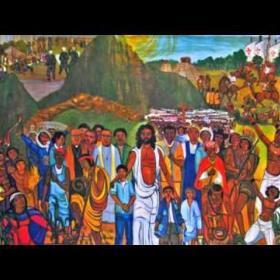 There was a lady who, every day at six o'clock in the afternoon, went to the village church to pray. She was very punctual and never missed her appointment. When she was late, because things in the house or dinner took longer than usual, she would run down the street to get there in time.

So fast did she do things to fulfill the schedule of her prayer that she often treated people in line in the market or walked by running over others. If some beggar would ask for a coin in the door of the Chapel, she would not look at them; She was so rushed that she went fast as lightning.

One day, "they passed him all": she quarreled with the grocer because it took him a long time to make an account of the things she had bought; She ran over a woman who had a bag full of potatoes and walked slowly; Finally, she turned her face to some boys who came to him to ask for some coins to buy milk.

In her own home, things did not go better: one of her children asked her for help in doing a task and told her to cope by himself; the husband, who had arrived very tired from working, had the idea of ​​talking with her for a while they were having a coffee, and he left it planted with the word in his mouth. Despite all these "obstacles", she left the home and arrived at the church almost on time ... and found that it was closed.

"How can it be !!", she said angrily as she searched for a way to get into the side corridor that bordered the temple. But nothing, everything was closed. She went back to the main entrance and, right there, she saw that at the door of the temple there was a sign inscribed that said: do not look for me here, I am out there with the people ... Jesus.

There are times when it would be convenient to remember the words of Jesus: "what you did to one of these little brothers and sisters of mine, you did it to me" ... Who we know as our neighbor is the first point of encounter with God. If we do not look for him there first, we can hardly find her anywhere else.

Re-read it and where it says lady (her or she) you write mister (hm or he) ... and where says husband you write wife.