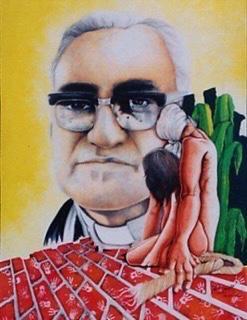 On a day like today, March 24, 1980, Archbishop Oscar Romero was assassinated in El Salvador and that same day, when he liberated himself from his body, he became our Saint Romero of America and making the Gospel of Matthew 5:11 real: Blessed are you when people insult you, persecute you and falsely say all kinds of evil against you because of me.

What then are the contributions of the revolutionary theology of Saint Romero of America? On the one hand, San Romero dared to say what most religious or political leaders do not dare to say: "I have to listen to what the Spirit says through his people and, then, yes, receive of the people and analyze it and together with the people build the Church ”. In other words, the people are on the one hand the thermometer that tells us the temperature and on the other hand the thermostat that will regulate that temperature.

Being with the people must result in our humanization. Hence, Saint Romero founded his ministry on the principle that "before being a Christian, we have to be very human ..." In fact, our spirituality - which is distinguished by having social, cultural and political dimensions- it is projected through our humanity. In other words, the more human we are, the greater our spirituality. San Romero's humanity made him a saint. It was not the way to die but the way he lived that that beatified him.

In this subversive theology, Saint Romero made it clear that “who cares about the person who is hungry, who is naked, of the poor, of the disappeared, of those who are in prisons, of all that suffering meat, has close to God". With this of course he was also saying at the same time who were the people who with their evil practices were far from God. That is why he also told us "that there is no more diabolical sin than to take bread from the hungry."

Hence his invitation to develop a ministry where we take responsibility against the injustices of our society, understanding that God did not create them but rather the unequal distribution of the creation of our Goddess where a few people accumulated a lot of wealth and many people it has nothing. In the face of these injustices that we have created, San Romero does warn us of not making the mistake of asking God to solve for us the earthly problems that correspond to us to eliminate. Otherwise he says, "that's lazy."

In his own words, Saint Romero asks us: “Brothers and sisters, do you want to know if your Christianity is authentic? Here is the touchstone: Who are you fine with? Who criticizes you? Who flattered you? You know there that Christ said one day: I have not come to bring peace but division…” This is my reflection question for today: Who are the people who feel good about me and who are the ones who criticize me? Romero lives and the struggle continues.