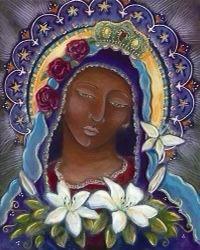 Reading: Mary Magdalene went to the disciples with the news: “I have seen the Lord!” And she told them that he had said these things to her. John 20:18.

Good morning, happy Thursday, and many blessings my dear family.

Today we celebrate the feast of Mary Magdalene, whom Pope Francis calls the Apostle of the apostles: she was the one sent by the Risen Jesus to announce the Resurrection to the Apostles. Today’s Gospel (John 20:11-18) takes place immediately after Jesus’ death. Mary has gone to his tomb very early in the morning, while it was still dark. When Mary arrived at the tomb, the stone at the entrance to the tomb had been removed! Mary immediately ran and found Peter and the “other disciple whom Jesus loved” and told them what she had found. She believed that someone had removed Jesus’ body from the tomb! She wanted them to go back to the tomb with her.

Then Mary immediately returned to the tomb. However, John does not say that Peter and the “other disciple” followed her to the tomb. Mary stood outside the tomb weeping at the loss of her friend and mentor. She had lost him to death, now she also had “lost” his body! Then Mary bent over and peered into the tomb. To her surprise she saw two angels sitting in the tomb. One at the head and one at the foot of where Jesus’ body had been placed. The angels asked her: “Woman, why are you crying?” Mary said: “They have taken the body of my Lord and I don’t know where they have laid him!”

After Mary said this she turned and saw a man standing there! It was Jesus! However, she did not recognize him. Jesus asked her: “Woman, why are you weeping? Who are you looking for?” Mary automatically assumed this man was the gardener. Surely, he would know where Jesus’ body had been placed. She asked him to take her to the place where Jesus’ body had been laid. She needed to tend to him and bury him with reverence and love!

Jesus then quietly spoke her name: “Mary.” In that instant, Mary’s eyes and heart were opened! And in Hebrew, she reverently spoke only one word: “Rabbouni,” which means “Teacher.” Immediately Mary stepped toward Jesus.

Mary is one of the first witnesses of the Resurrection, she was the one who brought the news of the empty tomb to Peter and John, and later she announced to the disciples, 'I have seen the Lord!' I thank God for these witnesses and ask for the grace to be myself a joyful and enthusiastic witness to the presence of the Risen Jesus in the world and to the joy and freedom that it radiates.

I reflect on the important role this woman was given by Jesus, and on the role of women in the Church today. I thank God for all the women who helped me know Jesus better, and pray and work that the Church finds ways of giving women their proper place in her ministry and leadership structures.