The disciples did not realize that following Jesus might become dangerous! 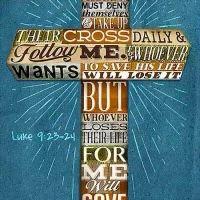 Reading: Then he said to them all: “Whoever wants to be my disciple must deny themselves and take up their cross daily and follow me. Luke 9:23.   Good morning, happy Thursday, and many blessings my dear family.   The beginning of today’s Gospel (Luke 9:22-25) is stark.  Jesus informs his disciples that the Son of Man will undergo great suffering, be rejected by the temple officials, be killed and then be raised up on the third day.  Put yourself in the disciples’ shoes.  What would be your reaction to these words?  I assume the disciples were shaken by what Jesus said, yet they also had heard the many complaints and threats against Jesus.  They must have known that He was in danger.   Did they realize that they also might be in danger?  After all, they were His followers and friends.  Were some of them tempted to return home to a normal life, to safety?  These thoughts may have flown through their minds, yet they had lived with Jesus.  They were his friends.  They loved Him and believed in Him, but were they also afraid for themselves and for their families?    Jesus warns the disciples that following Him will not be easy.  There will be dangers and threats.  If they do choose to follow Him, each day and every day they must take up their crosses and follow in His footsteps.  Imagine how sobering it must have been to hear Jesus utter those words.  When the disciples initially decided to follow Jesus, they were enthusiastic and eager to learn.  They did not realize that following Him might become dangerous!    Jesus also told the disciples that even if they lose their lives for His sake, they will be saved.  Jesus promised His disciples that they had much to gain by following Him, however Jesus also wants them to know the risks.  How would you or I respond if someone with whom we had lived, journeyed, and become friends, told us that he or she would be rejected, killed, and then raised up?   Jesus needed His disciples to realize that danger and hardship would be in their future.  He didn’t want them to assume that life as his disciples would be easy, simple, or glorious, but Jesus also told them that if they were to follow Him, they would gain the whole world.  What a powerful statement! Jesus is telling us the same thing today that he told his disciples thousands of years ago.  We also are his disciples in this world of ours – and the dangers are real   My sisters and brothers, at the start of Lent, Jesus puts before us the central events of his passion, death, and resurrection. Life holds so many challenges - the losses and daily disappointments that come my way. Do I just despair, fall apart, give up, or do I rise to them, shoulder my crosses with courage, knowing that Jesus shares the load, thereby filling me with deep contentment, even joy?   Blessings,   Luis+