What do we believe about Jesus? 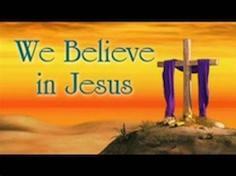 Good morning, Happy Thursday, and many blessings my dear family.

In today’s Gospel (John 8:51-59) Jesus is dialoguing with the Jews. Jesus tells them that if they truly keep his word, they will never see death. Imagine how astounded everyone must have been at Jesus’ words. Never see death? What was Jesus thinking? Everyone on earth understood that at some point in the future, they would die. This was the natural course of life!

When Jesus responds to the Jews, he does not respond to their criticism of him. Rather Jesus talks about his Father. He tells them that His Father is the one who will glorify him. Jesus also says that even though the Jews think they know God, they actually do not know God. Jesus, however, has a deep relationship with God. Then Jesus goes too far. He tells the Jews that his father Abraham had rejoiced to see his day. His listeners were astounded and disbelieving. Jesus truly was crazy!

Put yourself in the Jews’ shoes. If anyone said to you what Jesus said to the Jews, would you believe them? Or would you think they were delusional and perhaps had gone off their rocker? Most likely, we would think they were crazy or fanatical. After all, to the Jews, Jesus simply was another itinerant preacher. Why should they think that Jesus was above the norm of preachers? After all, he sounded pretty crazy when he said that he existed before Abraham. Talk about rubbish! That was impossible John’s gospel in general goes to great length to help us believe that Jesus not only came from God, but is God. The end of chapter 8 which we have today points out the great difficulties that the authorities had in believing that. The ordinary people turned to his miracles and accepted them as from the hand of God.

The gospel today highlights the difference between the way of Jesus and the way of the authorities. The divine way of looking at things is the deep meaning that Jesus brings to life. His statement “before Abraham ever was, I Am” pinpoints this difference. Ask Jesus to help you believe in his incarnation as he gives the gift of Himself to us.

What do we believe about Jesus? Have we distanced from him? Or do we continue to believe and trust Jesus? Or do we simply take him for granted? Today I invite you to stop and reflect on who Jesus is to you at this time in your life. Are you satisfied with the relationship you have with Jesus? If not, how would you like it to change? Then, will you take some steps to reestablish a close relationship with Jesus? Jesus is right beside us, waiting for us!