Day of the Annunciation of Mary 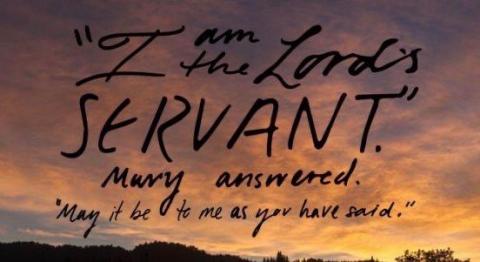 The Christian tradition today celebrates March 25 the Day of the Annunciation of Mary. In Luke 1: 26-28 we read: In the sixth month of Elizabeth’s pregnancy, God sent the angel Gabriel to Nazareth, a village in Galilee, to a virgin named Mary. She was engaged to be married to a man named Joseph, a descendant of King David. Gabriel appeared to her and said, “Greetings, favored woman! The Lord is with you!”

In the Christian sphere, the episode of the life of the Virgin Mary in which the archangel Gabriel announces that she is going to be the mother of Jesus is known as the Annunciation or Angelic Salutation. This episode appears narrated in the Gospel of Luke. First, Maria goes to fill a pitcher of water at the fountain and listens to a voice greeting her. Frightened for not understanding where the voice comes from, she returns to her house, where she begins to spin. It is then when the angel appears before her and announces her motherhood.

What can we learn from Mary today. Mary is a disciple, not in the sense that she accompanied Jesus during his public ministry, but in the existential sense: someone who listens to the Word of God and works according to it. This is how she appears in the Annunciation, as the one who listens and puts into practice the Word of God. Immediately after Mary, listening to the invitation from the Angel, she puts herself to the service, setting out on the road. Mary receives the invitation to leave herself, her city, to recognize the news of being the bearer of the Glory of God, of his Presence.

Maria's reaction, however, is to withdraw into her interior: "Maria, for her part, kept all these things, and meditated them on her heart." (Luke 2:19). Among the listeners who listen, keep and confront the word is Maria. Finally, in the Acts of the Apostles, the second part of the work of Luke also appears Mary, the mother of Jesus, at the founding moment of the Christian community, when the Spirit consecrates her to fulfill her mission: “All of them persevered in prayer, with the same spirit, in the company of some women, and of Mary the mother of Jesus, and of her brothers ”(Acts 1: 13-14). Mary, the mother of Jesus, appears integrated into the group that awaits the coming of the Holy Spirit.

Mary continues to be presented as the believer, who consents to the word of God in faith and allows herself to be led by it in a progressive revelation of the mystery. She is a true disciple, a figure of discipleship, a model of approval of the word of God, of divine initiative, which allows herself to be shaped by the Eternal. Are you willing to respond in the same way that Mary responded with her discipleship to God?