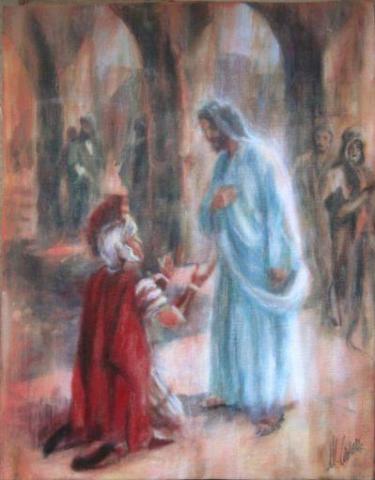 The Gospel for today, Matthew 8:1-4, is the story of a leprosy man. As terrible as leprosy was in itself, it was made twice as terrible by the treatment given to the leper. The Jews called leprosy “the finger of God’” indicating that that they regarded the disease ad a direct punishment from God. Luke with his usual professional accuracy of a physician uses a precise term that man who came to Jesus was “full of leprosy” indicating that the leprosy was fully advanced, and it is last stages. His case was severe, and he had probably been a leper for a long time.

The leper was isolated. No disease in the ancient world isolated an individual from society as much as leprosy did. In fact, he word “quarantine” comes to us from the practice of the Jews. In Italy in the fourteenth century people noticed that in times of plague that the Jews were much less severely hit than anyone else. They came to the conclusion that it was the result of the Jewish practice of isolating as unclean anyone who had touched a dead body. The Italian authorities therefore enacted a law that isolated for forty days anyone who had contact with a suspected case of the plague. Something similar to what we are experiencing.

The leper is to dress like a mourner going to a burial service – his own burial service. He had to constantly cry out everywhere he went – “Unclean, Unclean.”

But also notice in this story that the leper sought to be cleansed not just healed. It is significant that the leper does not simply say to Jesus ‘Heal Me” but rather he says, ‘Make me clean.’ On the surface those two things may seem to be the same, but they are not. You see while it is true that the leper’s disease had caused him a great deal of physical distress, but it is his uncleanness which has separated him from God’s people. A leper was excluded from the sacrifices, religious festivals and worship services. In many ways, he was only separated God’s people he was separated from God. It is hardly surprising then that one of this man’s strongest urges was to be cleansed so that he could once again worship with the people of God. This man wanted to worship God and Jesus gave him the ability to do so.

Jesus sternly told him not to tell anyone about the miracle that had just been performed. Instead he should go to the priest and make the offering prescribed by the law. But the leper disobeyed Jesus and began to tell everyone that Jesus had cleansed and healed him. It is easy for us to be critical of the healed leper for his failure to keep silent about what had happened to him. Yet on some level we understand that he just could not keep silent. The joy he felt simply overflowed.

Yet how strange it is – that although we understand that we have been command by Jesus to share the cleansing that we have experienced through Jesus – we are disobediently silent. Could we break our silence today and tell other people that Jesus cleansed us?