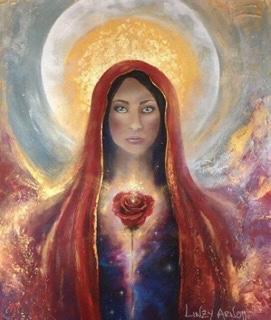 With today’s gospel (John 20:1.11-18) we also celebrate the feast of Mary Magdalene.  The popular belief is that is that she was a sex worker, saint, sinner, witness, wife. In the 2,000 years since Mary Magdalene is said to have watched Jesus Christ die on the cross, she’s been labeled many things. But something we know; she is the Apostle of the apostles.

The feast of St. Mary Magdalene is considered one of the most mystical of feasts, and it is said that of all the songs of the saints, that of Mary Magdalene is the sweetest and strongest because her love was so great. That love was praised by Jesus Himself who said that because much was forgiven her, she loved much.  Mary was a Jewish woman from the fishing town Magdala, on the western shore of the Sea of Galilee. Her name is mentioned 12 times in the Gospels, more than most of the apostles. Mark and Luke recorded the healing of demons from Mary’s life in their Gospel accounts.

Mary must have suffered from severe emotional or psychological trauma to deem an exorcism necessary. She was battered and bruised, injured and in agony from the suffering demon possession entailed. Mary lost all control, and dignity, along with everything she knew in her previous life. Beauty and wealth did not spare her from the evil that assailed and attacked her every hour of every day.

One can only speculate what it was like at the moment Jesus looked upon Mary in her state of desperation. Only He could have seen who she really was regardless of her derailed state.

Women in Jewish society did not typically carry important roles, which makes their involvement in Jesus’ ministry more radical than normal for the time they lived in.

After Jesus’s crucifixion—which she witnessed along with several other women from the foot of the cross—and after all his male disciples had fled, Mary Magdalene also played a key role in the story of the Resurrection. According to the gospels, she visited Jesus’s tomb on Easter Sunday, either alone (according to the Gospel of John) or with other women and found the tomb empty.

She was the one sent by the Risen Jesus to announce the Resurrection to the Apostles. I reflect on the important role this woman was given by Jesus, and on the role of women in the Church today. I thank God for all the women who helped me know Jesus better, and pray that the Church finds ways of giving women their proper place in her ministry and leadership structures.

The Church has historically dismissed Mary not just because of her gender, but also because of her message. Her story challenges ideas about spirituality, and the role of women in religion. Her story is about: Gratitude Should Drive Us; Your Past Doesn’t Matter When You’re in Christ; Don’t Let Deflated Hopes Keep You Down; and Go Forth and Tell the Good News