Luis Barrios, the priest and expert in criminal psychology who comes from New York to support the prison peace process: The rehabilitation system in Ecuador does not work 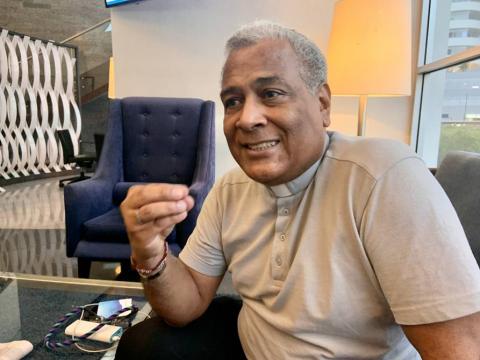 Since the government of Guillermo Lasso formed, on December 16, the commission for prison pacification, the Puerto Rican priest Luis Barrios, who has lived in New York for more than 30 years, has not ceased to be aware of what is happening in the detention centers. This week he makes his second visit to the country on this issue, but Ecuador is no stranger to him, since more than fifteen years ago he participated in another pacification process that involved two urban gangs.

Father Luis, as Barrios is known among the Latino community in New York, is not just religious. Forensic psychologist and professor at the John Jay College of Criminal Justice Institute of the City University of New York, this priest and human rights activist who defines himself as “a man of the left” is not afraid to tell the government that brought him what is wrong or does not work in the prisons of Ecuador. After having toured the prison centers of Esmeraldas and the Litoral Penitentiary in Guayaquil, Barrios speaks with this medium about progress and possible solutions to achieve peace.

The commission is about to complete two months, what evaluation have you been able to make of this time of work, can we speak of progress or is it still premature?

Yes, we can talk about progress because we have had an incredible opportunity to be able to visit the centers, we have heard the voices of the Government, the Police and the military, but the most important thing is that we have been able to speak with the PPL, we have had access to the pavilions and speaking with the so-called leaders, that is important because the prisons are not controlled by the government, but by the different groups.

What have the PPL told you in the visits you make?

I was recently in Esmeraldas, where the situation is calmer, but the main concern is food, access to education, violation of the human rights of family members, I saw how they took away medicine for the inmates and I do not see any criteria in that. They don’t let medicines in, but weapons do. In the Regional (in the Litoral Penitentiary) I even saw grenades on the table where I was talking with a PPL. They didn’t let me in with a cell phone, but those I’m going to see have a cell phone and they even lend it to me. Don’t tell me this is for security!

And in the face of that, what has the commission done?

We have spoken with the authorities about the complaints that the PPL have, but we have found an answer like saying: yes, I already knew that one. So it is very easy to talk about personal and interpersonal violence, but there is a structural violence that we can start dealing with overcrowding, because that is a violation of human rights. Basic theories say that when you are overcrowded, even the animals fight; so if they know this, why don’t they solve it.

How did you get linked to this commission?

I know that my name came from the PPL themselves, who may have heard of my work in New York, but I confess that I did not want to come here to waste my time producing just one document, because this is not the time to describe the situation that is wrong, but to act to remedy it. But listening to President Lasso, a center-right man, I’m not expecting much from him, but from the first day he tells me that the serious problem we have is overcrowding and that it can be solved if we start removing all those who have already served 60% of his sentences, I found that interesting and gave me hope.

Sure, 80% shouldn’t be there anymore. In Esmeraldas I saw a 93-year-old man, people without legs, people who cannot move are there, that is a violation of human rights. Another thing, the process of the PPL who need to have their cases reviewed in order to get out is a complete disaster. They tell them you have to pay and what hurts me the most is that I am hearing this from the PPL and the authorities know that there are some judges who have to be paid, and other officials have to be paid so that the cases reach the courts. judges, you have to pay for the processes to move.

So, have you been able to verify that there is corruption in the system?

Corruption is a cancer and those who are paying the consequences are the PPL. Brother, none of these centers are rehabs.

You are free to tell the government that brings you what it is doing wrong.

I imagine that the Government has its Intelligence Corps and they have to know where I come from. I am a priest, but I am educated on the left, from the socialist party in Puerto Rico and in New York, from the Theory of Liberation. I fight with objectivity, it’s not that I’m going to blind myself, but neither am I going to lend myself to a government coming to buy me or silence me; to bread, bread and to wine, wine. If I have said things to the Church, I also say it to the Government, even if they have invited me. And it is that this is not a trend, but a reality that merits a permanent public policy, beyond a government in power, it is the State that must have control.

What solutions do you see as possible to apply to the prison crisis that Ecuador is experiencing?

Part of what we are going to propose is to create a micro-enterprise from the prison to the street, to have a savings cooperative, to generate enterprises so that the PPL have a job opportunity; that is, not to leave him the drug as the only way to produce an income. They must be given the opportunity to generate a decent, not illegal, income from prison.

And is that possible?

This is already being done in Puerto Rico, they have a micro-enterprise that belongs to the PPL and their families, they say: this is our business, it generates income while they are in jail, but it also gives them the opportunity to have a job when they get out. Here they can have a micro-enterprise that provides the same food as the PPL, making clothes, in the United States they are making Victoria’s Secret clothes in there, they pack coffee beans. The same can be done here. There are good people here, but the structure does not work, the current rehabilitation system that Ecuador has does not work.

How can it be changed?

A penitentiary school is needed here, which has already been tried by other countries such as Colombia, which has a system worth seeing. The Dominican Republic was also able to establish it, it had a corrupt system, controlled by some officials, but a parallel one was created, which worked better and that was what was not useful. With a well-trained and well-paid prison school, you don’t have military or armed police inside, they are civilians trained and educated in human rights, mediation, conflict resolution. The director must have that training, graduated in that, he cannot be in charge of a plugged in, friend of a politician. We believe that micro-enterprises and the prison school can be created, rehabilitation programs can be established outside the prison, of course all of this will require an investment, but in the end that will be cheaper for the Government than continuing as we are. (I)