What a life-changing moment this must have been for this woman! 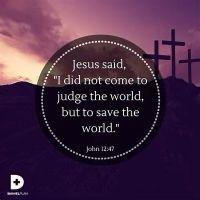 Reading: When they kept on questioning him, he straightened up and said to them, “Let any one of you who is without sin be the first to throw a stone at her.” John 8: 7.

Good morning, happy Monday, and many blessings my dear family.

Today’s Gospel (John 8:1-11) is Jesus’ encounter with the woman who had been caught in adultery. He was teaching in the temple area when the Pharisees come to him, bringing a woman who had been caught in adultery. They placed the woman right in the middle of the crowd. Imagine how this woman felt. What are the emotions you would experience if someone brought you to where there was a crowd of people and then they told these people about all the wrongs you had done? I assume most of us would be humiliated, angry and perhaps afraid!

The Pharisees begin by quoting the law to Jesus (as if Jesus did not know the law). They tell him that the law of Moses said that any woman should be stoned to death for her adultery. (Note: the stoning did not apply to the man who also had committed adultery.) The only person to be stoned would be the woman.

The Pharisees want to hear what Jesus thinks her punishment should be. Of course, they were only testing Jesus. They hoped to find cause in his response that then would give cause to arrest him. This was the sole purpose of their encounter with Jesus. However, Jesus realized that the Pharisees simply were trying to trap him. He knew that if he deviated from the Law of Moses, they would charge him and most likely arrest him.

Jesus chooses an unusual course of action. He simply bends over and begins to write in the dirt. His action took the Pharisees by surprise. This was no answer! So, they continue to ask Jesus the same question. Finally, Jesus responds by simply telling the Pharisees that whoever was without sin, should throw the first stone at the woman. And one by one, the Pharisees slipped away! Did they experience any shame about what they had done to this woman? Or were they simply furious that Jesus had bested them?

Then Jesus quietly asks the woman where everyone had gone. Had anyone condemned her? This woman must have been astounded that someone, a man, had stood up for her. She knew she had sinned, yet this man, Jesus, had protected her from the Pharisees. Then the woman responded to Jesus’ question simply by saying: No one had ever done anything like this for her in her lifetime!

Who do you most identify with in this story? The adulterous woman who, though guilty, did not deserve death by stoning? (Besides, where was her partner in adultery? Was he not equally guilty?) Or do you see yourself in those who condemned her, shamed her publicly and were willing to stone her? Or do you identify with Jesus who spoke kindly to her, refused to condemn her, and simply encouraged her to lead a more moral life in future? Mercy is a high priority in Jesus' value system. Is there someone to whom you are called to be merciful (forgiving)?